“Cast your bread upon the waters, for you will find it after many days”  Ecclesiastes 11:1 (RSV).

Alley the Pony.
She won us over on Christmas morning of 2008.
We’d lost so much-
our business,
our home,
our confidence,
Living in an unfamiliar town,
we were approached by a kind-hearted new friend named Debbie J.
She wanted to love on our three children-
(the only three kids we had at the time.)
Quietly, in the dark of night on Christmas Eve, 2008-
Debbie took a step of faith-
She brought over her beloved miniature horse, Alley,
as a gift.
In faith, love and tears, her owner, Debbie J, gave sweet Alley away to our children.
The children awoke early Christmas Morning
to the sounds of a pony neighing.
Tears in my eyes, we watched as the children peeked outside-
Out they ran and their hearts were smitten.

For three years they daily loved on her,
braided her hair,
Bathed and scrubbed her beautiful black and white coat,
took her on hundreds of walks,
and shared their hearts, tears, buckets of laughter, stories, joys and even their pets with her.
Until-
their young hearts were broken by love for those without a voice.
Precious and beloved Sierra and Alyssa-
each placed into our arms and hearts through San Diego County Foster Adopt program-
For two years,
our first three children were smitten with love for their little sisters as we endured the foster-adopt roller coaster.

They were exposed to other children and foster families.
Children with cruel stories ripped into our children’s world view.
In December of 2011 we learned that finally,
treasured Sierra and Alyssa were cleared for us to adopt!
Our hearts breathed again and celebrated.
That same day,
The children came to us and pleaded–
Please,
Can we adopt again?
Because, if we were in foster care or in an orphanage, we’d want to be adopted.
(Liam had a specific request:)
“I want us to adopt a little brother!  And I’m praying he’s black, like my littlest sister!”
(I’ve learned that God directs even the details of our heart’s desires according to His plans.)
They’d been saving their dollars earned from selling their chickens eggs.
Two full years of savings towards a desire to purchase another horse- a friend for Alley and one they could ride- had resulted in $2000.
Placing their “pony fund” into my hands, their eyes innocent, resolute and undaunted,
they pleaded for us to take their savings.
“Take our pony fund and use it to help adopt-
because children need homes more than we need a pony.”
Early the next morning, before the sun arose, I was on my knees.
“GOD! WHAT DO I DO?
they are just kids!
IS it wrong to let them give their pony fund?”
Somehow it seemed best to honor their desire.
My prayer continued-
We desire to adopt again.
Our hearts are broken for children who need a family.
Can you please turn their $2000 into $30,000- because it costs at least that to adopt internationally.
HE MOVED MOUNTAINS.
The Miracle.
Later that same morning,
my iPhone rang.
It was the Court Adoption Clerk asking us to come in and finalize Sierra and Alyssa’s adoption the following week.
What we hadn’t realized was that the adoption day we were assigned
was the LAST DAY to finalize adoptions in 2011.
2011 was the only year in USA history that our government gave families $13,500 for each child adopted.  If the adoption day had been even one week after that, we’d not have received this miracle in that way.
That phone call- after our prayer-
was the equivalent of $27,000 cash.
(Our accountant was initially speechless saying he’d never seen anything like this.)
We went to the bank and opened an “Adoption Account” that day.
Seeing their gift turn into $29,000, the children fervently decided to pray that we could
adopt TWO more children.
(and of course Liam prayed for two little brothers.)
They decided that if they re-homed all of their pets, then the monthly savings found by not purchasing animal feed and care could be added to the adoption account.
So, tearfully, yet joyfully resolute,
over the next few weeks, they kissed their chickens, their goats and finally,
even their beloved Alley goodbye.

The day Debbie returned for Alley was deeply sad.
Tears.
It felt like we had foolishly cast precious bread upon the water.
That was in the spring of 2012.
MANY MANY DAYS passed without hope.
Days turned into years.
OFTEN I fretted that we’d let the children sacrifice their hearts foolishly-
fearing they’d given up their treasured Alley and their pony fund in vain.
Often we received counsel that adopting again was foolish, inconsiderate of our children, taking on too much, too costly, dangerous, and that it was unlikely to even happen.
BUT GOD.
Both boys came-
two crazy miraculous stories involving two countries… 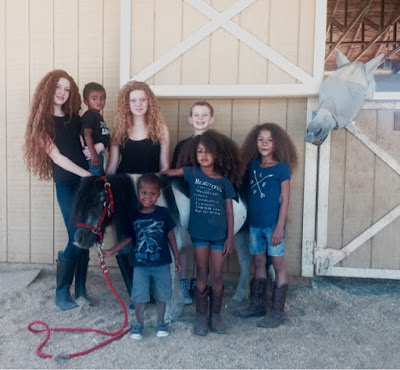 Visiting  Alley this week felt miraculous-
She has had a happy life with her beloved first owner, Debbie J. and several other horse friends.
Watching Sierra and Alyssa braid her main and tail melted my heart- they are the ages our oldest three were when Alley had been placed into our lives-
(Sierra and Alyssa have heard numerous stories about Alley.)
Watching our three children who remember and love Alley spoke faith into my heart-
They’ve tasted miracles after following their child-like faith that led them to sacrifice.
I could see them tasting bread they had cast upon the waters
years before.
And as they held their adored little brothers close,
Their hearts re-lived precious, rich memories-
I could see their hearts becoming further impassioned.
God writes beautiful, redemption stories. Seeing Alley the pony yesterday, warmed our hearts and strengthened resolve to live life passionately… Seeing our miracle boys with her seems unreal-
if only we’d known in that long, frightening, painful wait.
Truly, He is faithful.
(And I need to say this- Although our children and we dared to step out towards adoption again because of “the need”,
we NEEDED our boys.
They have changed our lives deeply, profoundly, richly.
Grateful.
Oh how we desperately needed them.)
“Cast your bread upon the waters, for you will find it after many days”  Ecclesiastes 11:1 (RSV).
Throwing bread onto the water.  That sounds wrong- even stupid.  It absolutely is irrational and certainly most would advise against it because-
Anyone knows the bread cast upon the waters will dissolve and be really gone-
To ever find it again would clearly require a supernatural act of God.
A miracle.
Isn’t this what He invites us to do?  Risk comfort for the desires HE has placed into our hearts?
He risked all for us-  This God who LOVES to give good things to HIs children…went naked, torn and massacred to the cross- purposed to pay for our adoption into His family-
He became bread-
cast upon the waters-
FOR US.
This God who asks us to cast our bread upon the waters is the same God who fed thousands with only 5 loaves of bread and two little fish.  This God.  This God who gave all for me,  This God, who died for me,  This God who conquered death and spoke the heavens and earth and life itself into existance-  He’s the one calling us out to cast our bread upon the waters- to give all we have been given to feed the fish around us.  And then watch as He comes through.
He invites us to step out
where miracles are required….
To cast our bread upon the waters.
The most amazing, life transforming miracles can only happen when they are required.
Are u waiting after a scary, unsupported, step of faith?
Take heart.  Eyes on Him- not on the waters- not on the voices of discouragement and fear often even coming from well meaning loved ones.
Place your eyes on Him-
HE will keep you in perfect peace.
And at the Perfect time,
You will see bread come back to you in ways you could not have imagined…
Because HE IS FAITHFUL.
Habakkuk 2:3 For still the vision awaits its appointed time;
it hastens to the end—it will not lie.
If it seems slow, wait for it;
it will surely come; it will not delay.